The end of June and beginning of the summer, has remained, like May, very agitated for the Conquistando Escalones Association. We continue in the struggle to raise funds for research that will save the life of our family and can also cure millions around the world, given that as discovered in 2013, the genetic mutation that causes us Limb-girlde Muscular Dystrophy 1F, at the same time immunizes us against HIV. By now, more than 120,000 euros have been paid to the groups of researchers working for it, and 200,000 are those needed before the end of 2018 so that the investigations do not stop. 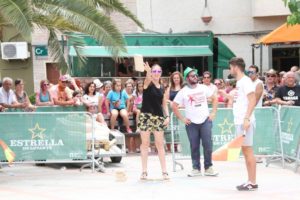 On June 25 was held in Valentin (Murcia) the ‘IV Valentin World Championship of Brick Throwing’ organized by the Association FILVA and the Conquistando Escalones Association, and thanks to all the attendees and the official sponsor Estrella de Levante , it was all a success. 250 participants, declaring all-male champion Fernando Zamora, with a 10’76 meter pitch, which was a new world record, and being the champion of the female category Maria Gabarrón Moya, with a thrown of 5’50 meters. 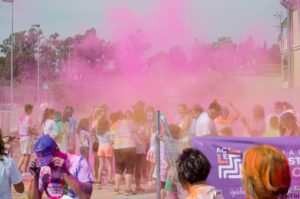 At different times, but at the same location, the ‘Terracotta Colors Run’ was held, with more than 200 participants and with benefits that besides helping our family, also went to cover part of the treatments of a child, Victor, who suffers from a rare disease, called Jacobsen’s Syndrome. Between both events, it was possible to raise 1203.25 € for the fight against Limb-girdle Muscular Dystrophy 1F and HIV.

Dance and running through Alicante and Italia 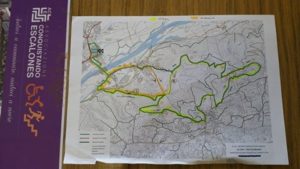 Also on the 25th was a solidarity march, in this case on Italian lands, more specifically in Gradisca d’Isonzo, where despite the storms and the early morning, they gathered about fifty runners and raised € 100. 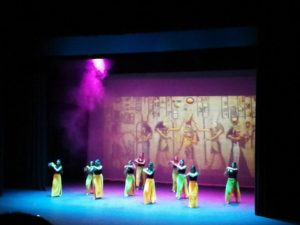 And almost closing the month, specifically on Tuesday 27 June and in Villajoyosa (Alicante), raised € 2,128 thanks to the plenary in the two passes of the ‘Festival Tribalia Dance’ organized by the Tribal Danza Academy and held in the Auditori La Vila.

At the end, and in total, just over € 3,400 to welcome the summer and to continue to fund medical research seeking the cure not only for us, but for millions around the world. Thanks to all the assistants, who help us in the organization, the City Councils of the localities where we live those affected by the Limb-girdle Muscular Dystrophy 1F and of course, to the sponsors. We trust in the work and tireless struggle to be able to get to know more people and receive more support for research that has already changed the history of science.