‘- On Sunday, November 27, Conquistando Escalones will have a stand located in the Plaza del Ayuntamiento (Town Hall Square)

– You can buy for only 5 euros, copies of the novel “La lluvia es una canción sin letra”

– Solidary bracelets, silk-screened lacasitos, BeeRRockFest t-shirts and numbers for the drawing of a Villarreal CF t-shirt and a dinner

Following the success of the ‘Rock & Books Festival’ celebrated in the Peña Celtic Submarí, where more than 400 copies of the novel ‘La lluvia es una canción sin letra’ by Angel Gil Cheza were distributed, there are still more than 2000 copies that await for owner in exchange for a simple donation of 5 euros, as part of the solidarity campaign that, as we announced, the writer carries out with our association.

Everyone who wants to acquire it will have a new opportunity at the Santa Catalina Fair in Vila-real, since Conquistando Escalones will have a stand in it, next to the Town Hall Square. This fair, considered a provincial touristic fair, will be held throughout the next Sunday, November 27. 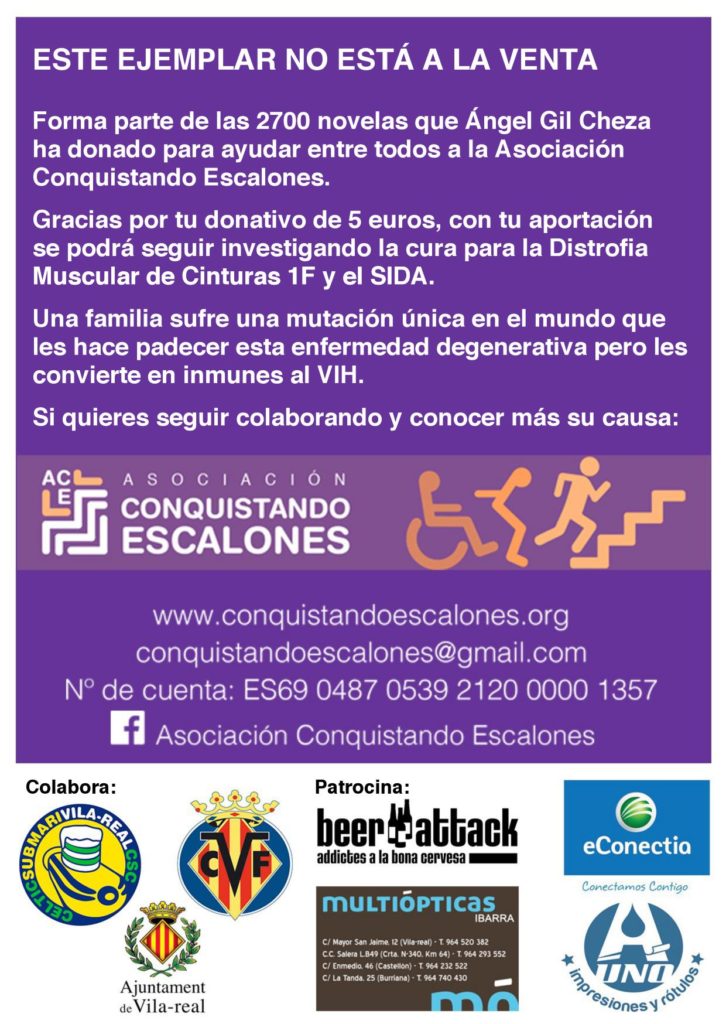 This campaign is being carried out with the collection of funds for the medical research. Thanks to the collaboration of the Penya Celtic Submarí, the Vila-real City Council and the VillarrealCF. As well as the sponsorship of Multiópticas Ibarra, To one impressions, Econectia and Beerattack.

Although the presence at the fair will be devoted mainly to spread the word about this campaign and for everyone to get the book, the solidarity bracelets and silk-screened lacasitos of the association will also be for sale, as well as the latest numbers of the raffle of 2 Villarreal CF signed and dedicated shirts and a dinner for 2 in El Racó de Pepa.

Remember: We are waiting for you next Sunday November 27 at the Santa Catalina Fair of Vila-real.