Last November 20 took place the Marathon of Valencia next to the 10K, an event in which 6 runners from the ‘Peña’ Celtic Submarí ran wearing the Villarreal CF shirt thanks to the donation of the Vila-real club as part of a campaign we started weeks ago.

Sponsors collaborated with their donation in exchange for putting their logo on that shirt, others helped cover printing and poster fees, while several businesses in Vila-real and Castellón placed boxes where anyone who wished could donate as a Symbolic sponsorship of each kilometer of the total 42 kilometers that the marathon had. In total, 465.71 euros have been collected in this campaign, which will go directly to the medical research. 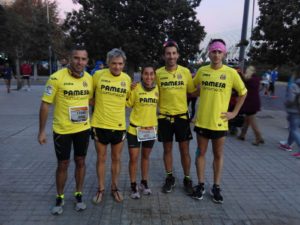 Thanks to Ramón Torner, Ferran Torner, Domingo Font, Jorge Teruel, Neus Aymerich and Kike Bordería, the brave runners who made it possible, with extra thanks to Domingo Font, the ideologue and engine of what has been achieved.

Everyone managed to finish the marathon, Domingo with a time of 4h7min, Kike 3h43min, Ramon 3h11min, Neus and Jorge 3h55min, and Ferran 42 minutes in the 10k. 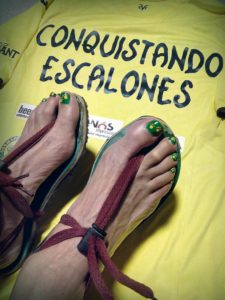 Apart from them, we want to thank those who, for their cooperation, sponsorship or let us put the solidarity fund in their business, have made it possible: Celtic Submarí, Canós Impressors, CASDA, Esport2, Lina Granell, Beerattack, VilaSport FS, Maria José Roca Estilismes, Perfumarte, Vila-fruit and Catering Pastelería Esther.