‘- ‘A.C.E. Beer ‘will have its space at the Barcelona Beer Festival (March 16-18), the largest craft beer festival in Spain and southern Europe

– The benefits obtained from the sale of ‘A.C.E. Beer ‘ are devoted entirely to the research of Limb-girdle Muscular Dystrophy 1F and HIV

– The Conquistando Escalones Association (A.C.E.) is formed by a family whose rare disease immunizes them against HIV

The next weekend, from 16 to 18 March, the 7th edition of the Barcelona Beer Festival, the largest craft beer festival in Spain and southern Europe, will be held in La Farga de l’Hospitalet de Llobregat. Hundreds of professionals, amateurs and the general public will meet to try some of the 400 beers that will be in their near 100 shooters.

The organization of this festival, has  to invite the Conquistando Escalones Association so that it can present its craft beer (‘ACE Beer’) and besides being one of the beers that at a given moment can be tested in the shooters, on  Saturday morning, will have a space within ‘Meet the brewers’ to be able to test it and to know more closely the project.

The Conquistando Escalones Association is formed by a family that suffers from a rare, genetic and degenerative disease called Limb-girdle Muscular Dystrophy 1F. The genetic mutation that causes it is in the protein that introduces HIV into the body when a person becomes infected. Researchers have demonstrated in the laboratory, that therefore, said mutation, makes them immune to HIV and seek a cure that can not only can save them, but a is also door to a cure for millions. Currently there are up to 7 research groups from Spain and Italy, in coordination with different research centers and laboratories around the world who work for it. And it is the Conquistando Escalones Association which does not stop to get the funds to pay for them. € 200,000 raised thanks to campaigns, events and proposals like this one, making their own craft beer. By the end of 2018 € 150,000 more will be needed. 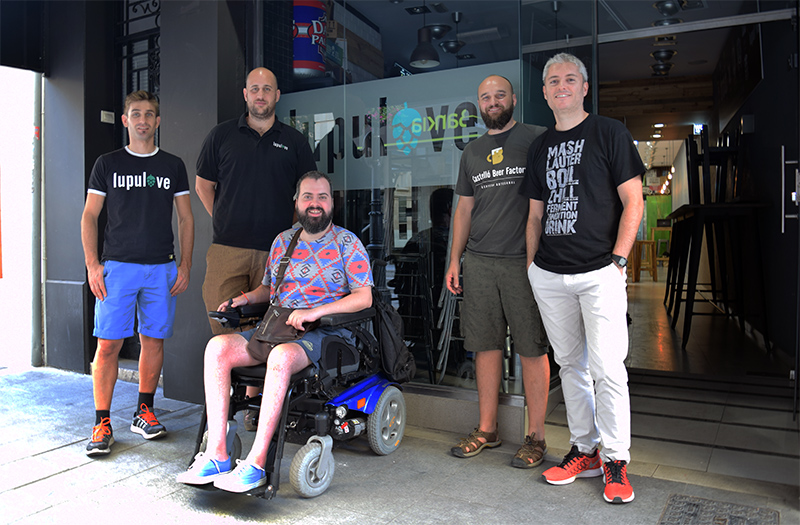 Currently it can be consumed in about 50 locations in the province of Valencia and Catalonia and can be obtained both individually and professionally. More information at acevicepresidencia@gmail.com or at 605263064.