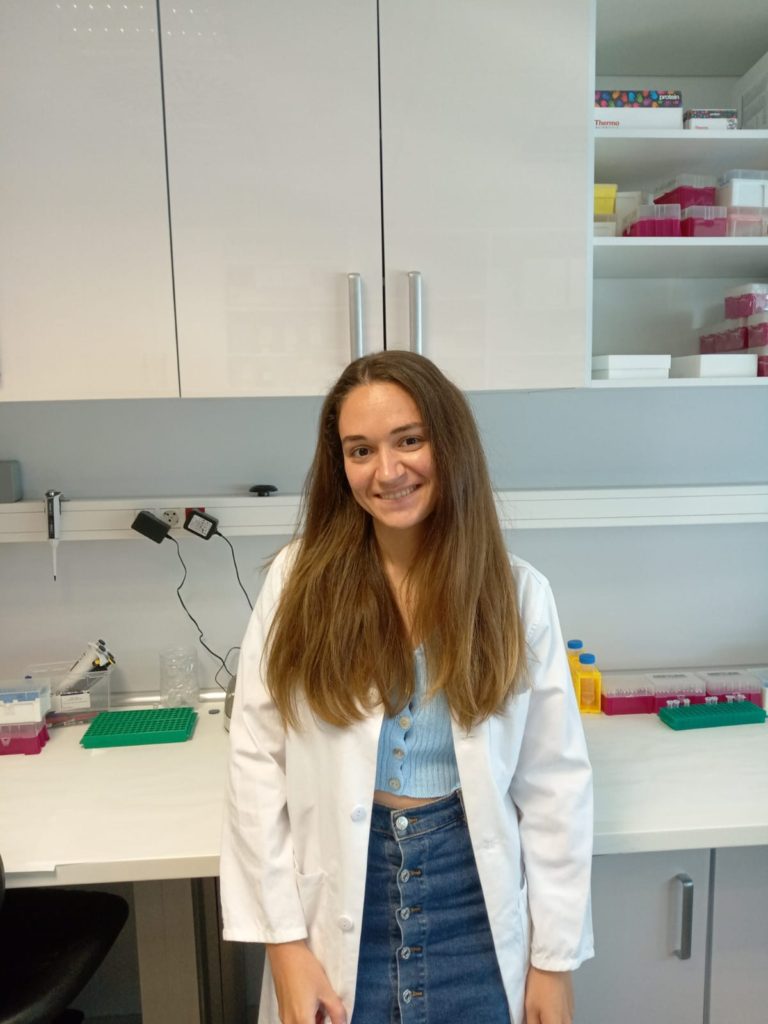 Marta Selva Giménez is the new pre-doctoral researcher who has joined the team at the La Fe de Valencia Neuromuscular Pathology and Ataxia Laboratory, led by Dr. Juan Jesús Vílchez. This has been thanks to the agreement signed between the La Fe de Valencia Research Institute and the Conquistando Escalones Association at the end of 2020, in order to collaborate financially in the research carried out by said center on Limb-girdle Muscular Dystrophy 1F-D2. For this, the commitment was also signed by Conquistando Escalones of a contribution of € 26,400, of which half has already been paid after the place is announced and the remaining part will be paid soon. This aid covers the hiring of Marta with exclusive dedication to the research activity carried out in said aimed at the search for therapies for the aforementioned disease. The aid also includes running costs and consumables.

Biography of Marta Selva Giménez and her work in the laboratory

Marta Selva Giménez, graduated in Biochemistry and Biomedical Sciences from the University of Valencia (UV). She is currently completing the Master’s studies in Medical and Pharmaceutical Biotechnology at the University of Florence (UNIFI), carrying out the final Master’s work in the Neuromuscular Pathology laboratory of the IIS La Fe. Marta has joined the line of work in dystrophy of LGMD1F-D2 girdles, where he will focus on the search for altered pathways in the disease, through the data obtained through RNA sequencing and the study of cellular and molecular markers both in muscle biopsies of patients and in cell lines.

In recent months there have been significant advances in the work carried out by the team led by Dr Vílchez. On the one hand, the cells of patients immortalized in collaboration with the team of Dr Vicente Mouly, from the Institute of Myology of the Sorbonne University in Paris are already available to the rest of the researchers involved who have requested them for their different projects. For example, as we mentioned a few days ago and we showed you in THIS VIDEO, in collaboration with the team of Dr Artero from the University of Valencia, the drugs that have given positive results in models of drosophila (vinegar fly).

Considerable progress has also been made on one of the future targets set in December. 40 samples (muscle and patient and control cell) have been submitted for whole human transcriptome sequencing (including miRNA, LncRNA and mRNA sequencing). As we said, this RNA sequencing, in collaboration with the Hospital Príncipe Felipe de Valencia and the University of Cambridge is vital to understand how the disease works in the genes and their expression and thus understand the cause of the disease. Roughly, it could be exemplified that if DNA is the hardware of a patient, RNA is the software. This represents a payment of about € 30,000 for Conquistando Escalones, of which a third part has already been paid and the rest will be paid throughout the summer. Once the sequencing is complete and the results obtained, we will publish a note about it.

Laboratory advances are also being made in the field of Crispr / Cas9 gene editing, thanks in large part to the availability of the edited cell line, which is already being characterized by its cellular and molecular expression. And the magnetic resonance studies are being completed, which help to learn more about the pathology and in the coming months they will be published in renowned scientific journals.

We want to thank Javier Poyatos, Inmaculada Azorín, Maria Pilar Martí, Núria Muelas, Ana Casaus, Lorena Fores, Roger Vílchez and, Rafael Vázquez as well as the rest of the team involved in one way or another in the work that is being carried out at the IIS La Fe. Despite all the problems created by covid19 (starting with the laboratory closing for months), it is worth praising all the work and progress that Dr Vílchez’s team, led by him, have managed to carry out in the last months. These advances will increase in number and speed thanks to the hiring of Marta Selva, the availability of cell lines and even more if possible, it will do so when RNA sequencing is completed in the coming months. All these advances are not only positive for Dr Vílchez’s team, but they also advance exponentially the rest of researchers involved in the search for treatments for 1F-D2 Limb-Girdle Muscular Dystrophy.