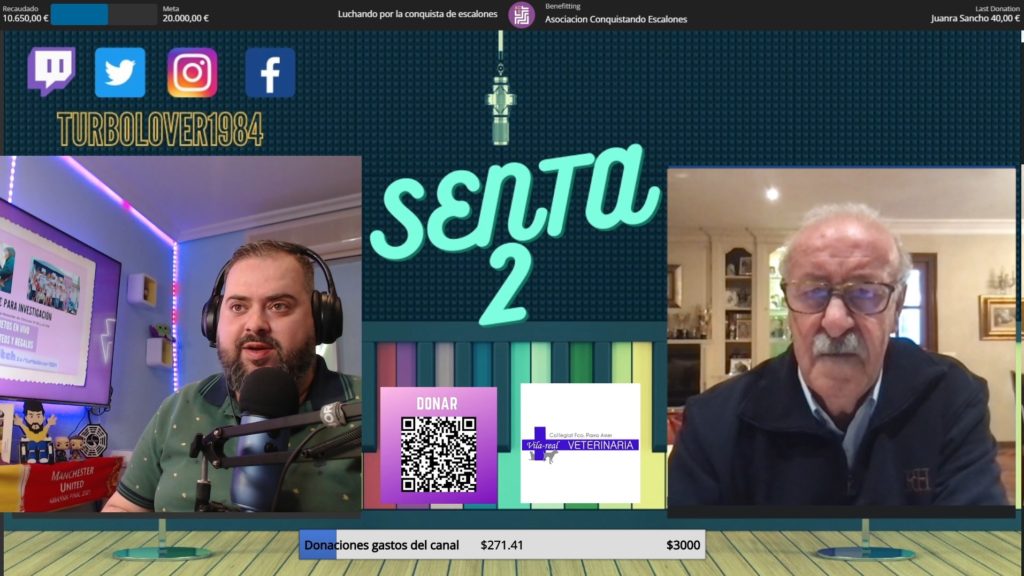 The former national selector, Vicente del Bosque, has been the last guest on the Twitch channel of the president of Conquistando Escalones, Abrahán Guirao. During the relaxed conversation of almost an hour that both had, the one who was also coach of Real Madrid, made an appeal to the public administrations, indicating that for patient associations “the ideal thing would be for them to have institutional support and for us not to be subject to to clarity”.

An affirmation that he made after Guirao explained the reason why there is a fundraising campaign on his channel, which is none other than obtaining €20,000 that covers a few months of the research that is being carried out at the University of Valencia to find palliative drugs for Limb-girdle Muscular Dystrophy 1F/D2. To this end, the president of the Association explained that, despite the health and mobility problems caused by this degenerative disease, new ways to raise funds are always being sought. For this reason, and to encourage donations, in addition to varied content, Guirao on his Twitch channel performs challenges every time economic milestones are achieved: from recording a song to performing a monologue to reaching €20,000 where he will perform a wrestling match. Other initiatives that have been carried out, after the health crisis caused by the expansion of COVID-19, has been the publication of a children’s and youth book «El torneo de su vida», written by Guirao .

It should be noted that del Bosque is a person involved in social issues since one of his children has Down Syndrome, which he referred to as “our light and our love”, and wanted to emphasize that “I trust a lot in Spanish society, in the solidarity of the people but, I think that the ideal would be for the administrations to cover all these situations” while adding “but having said that, it is not bad for people to help and collaborate so that the investigation is better”.

In the minutes of talk, his career as a footballer was also reviewed. In this sense, he indicated that his time at Castellón C.D. He has very good memories, among other reasons, because it was his training stage at a sports level. With regard to current football, there was a special mention of Villarreal CF, a team whose career he praised until obtaining their European title, he spoke of the presence of some groguets in the Spanish National Team such as Yéremi Pino, Pau Torres and Albiol, the continuity de Torres in the club of his city or why he did not summon Marcos Senna to the National Team.

In addition, during the talk, developed in the “Senta2” section of the channel, del Bosque also spoke about topics that generate controversy in society, such as the Super Cup in Saudi Arabia, which he said that “sometimes, the power of money it can more than romanticism” or homosexuality in football, about which he said he would not understand that someone could not express their sexual condition from freedom and respect. The full interview is available here: