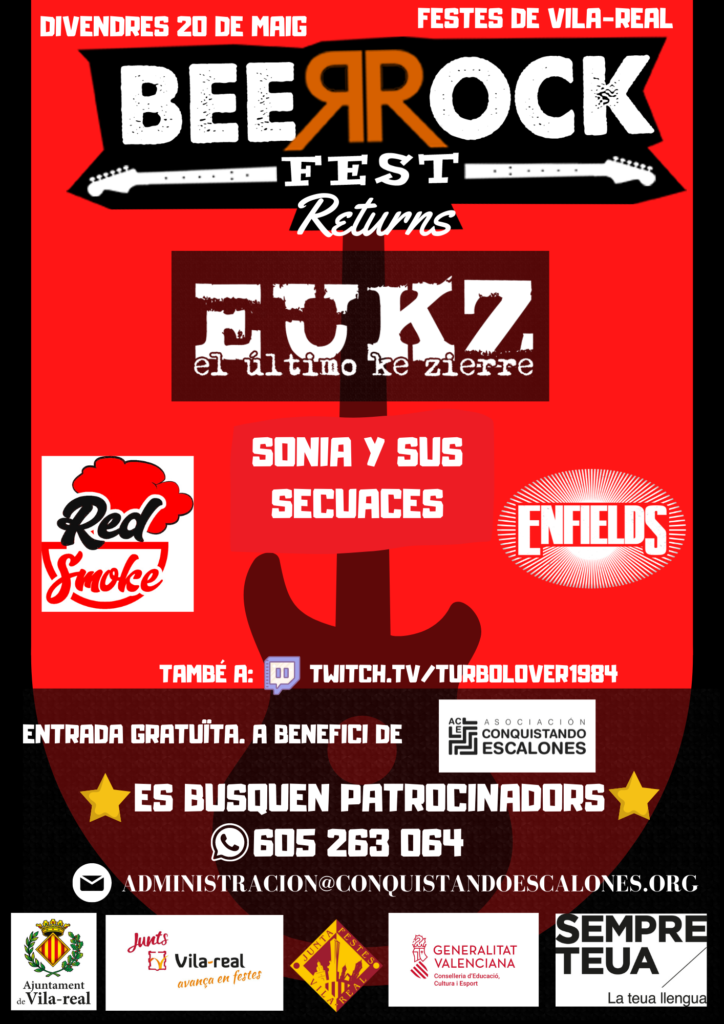 After two years without being able to enjoy it, the BeeRЯock Fest is finally back! On this occasion the appointment is next May 20, the second Friday of the patron saint festivities in honor of San Pascual de Vila-real (Castelló). For this very special sixth edition, the line-up is made up of some of the most cutting-edge bands in the province of Castellón, led by the mythical band El Último ke Zierre. In addition, Red Smoke, Sonia y sus Secuaces  and Enfields will also accompany us. The opening of doors will take place at 18:30 and will last until well into the morning. Admission is free and there will be stands of craft beer and homemade food and other types of drinks for those who are less lovers of hops and barley.

The BeeRЯock Fest Vol. VI, organized by the Conquistando Escalones Association with the collaboration of the Vila-real City Council Festival Department, as well as the Festival Board, changes location and will be held in the temporary parking lot located on the street Jaume Roig corner with Ducat d’Atenes. An event that is almost a tradition in city festivities and that has a charitable character, since all the profits obtained go to medical research on Limb-girdle Muscular Dystrophy 1F/D2 and HIV.

In order to ensure that most of the profits go to medical research, like every edition, companies that want to advertise themselves and help with their sponsorship to cover the expenses derived from the realization of the festival are sought and needed. Anyone who wants to join can contact until May 2 at 605263064 or write to administracion@conquistandoescalones.org.

We’re back in a big way and hope to see you!