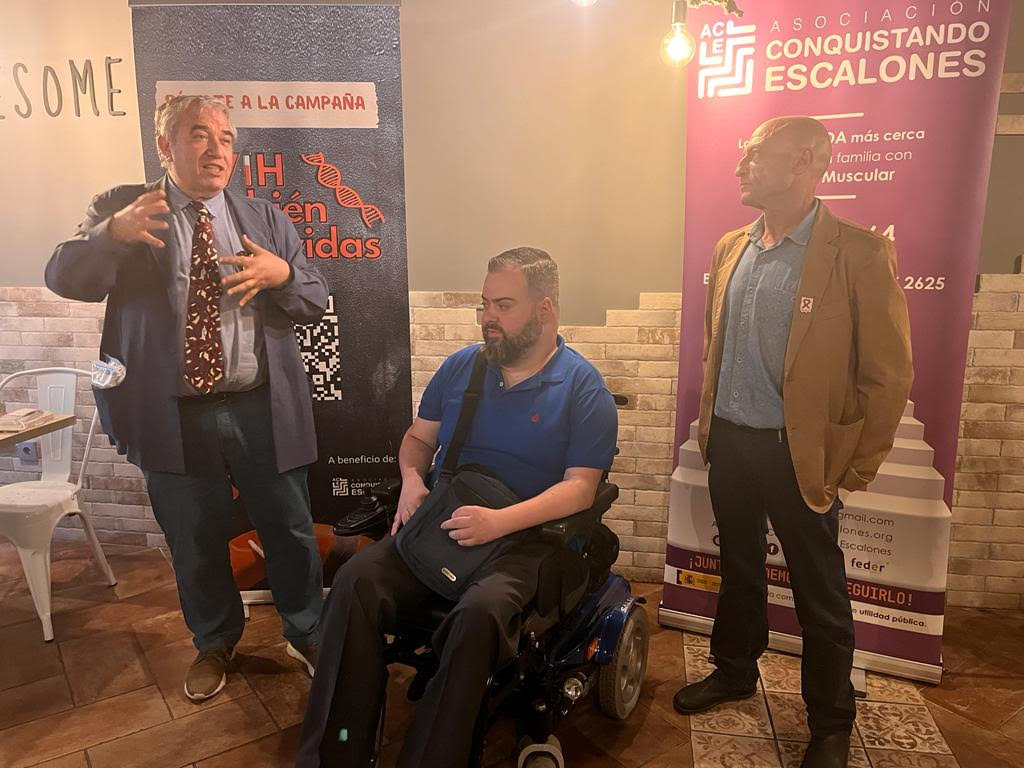 This Thursday, June 2, the campaign ‘El VIH también salva vidas’ was launched by CASDA (Citizen Association against AIDS of Castellón) on the occasion of its 25th anniversary. The entity makes an appeal to help the Conquistando Escalones Association to defray part of the medical research expenses that drive the search for treatments for Limb-girdle Muscular Dystrophy 1F/D2 and HIV, given that the mutation that causes the muscular disease, immunizes against HIV. Some of the most important treatments against HIV that exist today were discovered thanks to a patient who, in the 1990s, had 60% immunity to the virus. The members of Conquistando Escalones present more than 90%. There are already drugs that work in the laboratory and it is sought to make the leap to human trials.

Manuel de Gregorio Cortés, president of CASDA; Abrahán Guirao Romero, president of Conquistando Escalones, and Dr. José Alcamí, director of the AIDS Immunopathology Unit of the Carlos III Health Institute in Madrid, have been in charge of announcing the details of this action as well as the status of the which is the research being carried out by Dr. Alcamí together with other scientists. The goal is to be able to stop 1F/D2 Limb-girdle Muscular Dystrophy, save the lives of those who suffer from it with drugs that could also help against HIV. And in parallel, continue researching and discovering the functioning of Transportin 3 (a mutation in this gene grants protection of more than 90% against HIV to those who have it but causes limb-girdle muscular dystrophy) to find not only palliatives, but not a definitive cure.

During his intervention, Guirao thanked “all the support of Manu and CASDA from the beginning of the creation of Conquistando Escalones”. Also thanks to them, Guirao commented, “other HIV associations have gotten to know us, something that is very important for us, since we are a family with few affected people, so we receive any type of help and the experience in the fight against people who have HIV and all the people within their reach can be a before and after for Conquistando Escalones”. The president of Conquistando Escalones has pointed out that “despite our mobility and health problems, we have managed to collect and pay researchers worth half a million euros, so we are at this turning point where we are now with the support of CASDA towards, perhaps not the final stretch to a cure but to the search and application of treatments that stop the disease, makes us very excited and grateful”. “We hope that this campaign will go far and involve many people”, Guirao concluded.

The president of CASDA, to whom his colleagues have given him a plaque in gratitude for his work, has assured that in these years of work on HIV “the concepts have changed” for what they have considered that “it was time to leave the cave and show us as part of society”. “Now Abraham needs more help than we do,” said de Gregorio, who added that HIV “has taken many lives but it can also help save many others.” For his part, Dr. Alcamí has ​​detailed the point at which the research is and has lamented that “the times of science and patients are not the same” while insisting that the work they carry out in the laboratory cannot separate advances on HIV and muscular dystrophy. “It is an enormous challenge personally and professionally,” said the director of the AIDS Immunopathology Unit of the Carlos III Health Institute in Madrid.

The solidarity initiative, which can be accessed through this link https://www.migranodearena.org/reto/el-vih-tambi-n-salva-vidas, will be active until December 1, World Day of the Fight Against AIDS. The initial challenge of the campaign is to raise €25,000 for medical research, with an ambitious goal of reaching €100,000 to carry out the first clinical trial. In the coming weeks, associations and groups will join, having access to the campaign through QR codes in their facilities, especially when carrying out free rapid HIV tests throughout the country.

The event was attended by representatives of entities such as CC.OO., Cesida and Calcsicova, from the Universitat Jaume I, from the José Soriano Foundation, as well as Dr. Manuel Arnal from Hospital de la Plana and the director of Public Health in Castellón, Carles Escrig, and the mayors of Vila-real, Silvia Gómez (Health and Social Services), and of Tales, Vicent Ros (Culture).