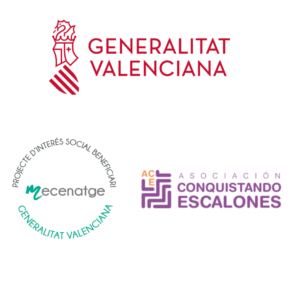 The Generalitat Valenciana, through the Patronage Office, has included in its portal the scientific project of the Association Conquering Steps as a scientific project of social interest. Specifically, within the lines of research that we coordinate, that of ‘Repositioning of drugs in Limb-girdle Muscular Dystrophy 1F/D2’.

This involves, among others, the work of La Fe and the University of Valencia, in which the drugs already found as potential for the treatment of Limb-girdle Muscular Dystrophy 1F/D2 are being tested. They are being tested in patient cells to decide the most optimal for application in a clinical trial in patients. In the coming months, these checks will continue to be carried out, as well as in a mouse model and also in collaboration with the Carlos III Institute in an “in silico” model and work will be done on the application in possible treatments for HIV with the drugs that give results positives.

The goal is to raise €100,000 for the clinical trial of the most promising drug.

As Conquistando Escalones is also an association declared of public utility by the Ministry of the Interior of the Government of Spain, both donations from individuals and companies have high tax deductions.

We currently have this campaign active on Migranodearena.org for the aforementioned objective, where you can also make a direct donation in a simple way.

And on our website you have many other ways to collaborate such as Paypal, Bizum or become a member.