– Downloading is free but most of the benefits from the extra supplements and merchandising will go for Conquistando Escalones
The VillarrealCF has presented this noon its official video game called ‘VillarrealCF Soccer Hunters’ with the presence of the club, its creators (Vampirako Studio) and our vice president Abrahán Guirao, who along with Omar Serralvo, María Martínez and Sara Serralvo, is part of this creative study.

The video game, pillar fundamental, but initial of the ‘VillarrealCF Soccer Hunters’ project, is now available for download for free for Android and IOS. The game has the possibility of making additional purchases, and also will be presented soon, among other things, a book and merchandising. A great part of the benefits will go directly to the cause of Conquistando Escalones, which is none other than paying for medical research that seeks the cure of 1F Limb-girdle Muscular Dystrophy and AIDS. 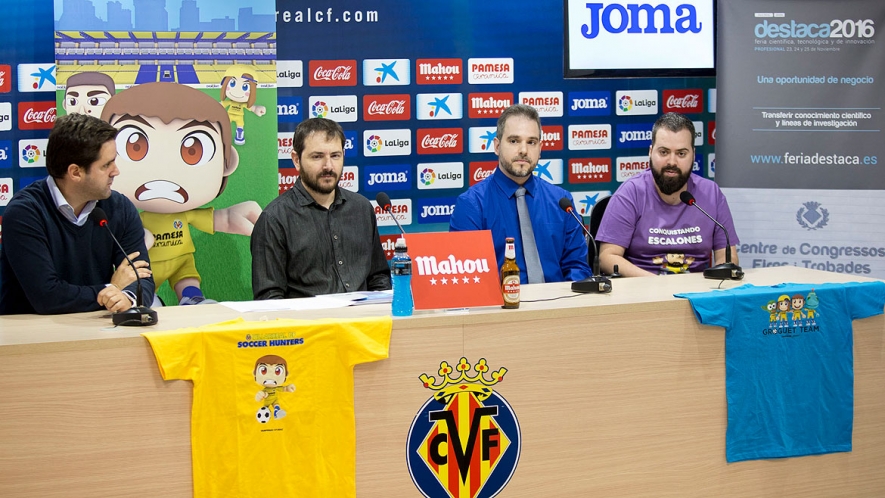 As their creators have defined, the ‘VillarrealCF Soccer Hunters’ app moves away from any existing to date product of this type.  A video game in which you embody a young football lover who will have to face a series of fantastic creatures to save the world. Train him, feed him, equip him with special skills and opt to be the number one in the world ranking, are some of the things that can be done in a game that also includes football tournament, a dozen mini-games and the possibility to get into the skin of Bruno Soriano or Roberto Soldado among others. In addition, ‘VillarrealCF Soccer Hunters’ seeks to highlight and instill values ​​such as fair play, teamwork, and perseverance and humility on the way to a goal. Vampirako Studio presents the first official videogame that exists with such characteristics, and they hope to extend it in the future to other clubs and therefore, to increase the aid and repercussion for Conquistando Escalones.

Is possible to play in spanish, english and valencian.