The relationship between Conquistando Escalones Association and Quesomentero Cheesebar was love at first sight since the establishment opened in late summer of 2015. When our vice president Abrahán Guirao met Alberto Javier Santos (chef and manager) beyond the gastronomic connection solidarity bonds were forged and, over time, a great friendship. Alberto knew, while increasing the shining in his eyes, the story of a family, who suffered from a Muscular Dystrophy called LGMD1F and whose mutation immunized them against HIV. A sparkle in his eyes because in his hometown, to which he had just returned as a prodigal son to fulfill his dream of riding the cheese paradise, there was a find of such caliber and, because ever since he dreamed of opening this business, I wanted him to have solidarity side and this had just appeared before his door. 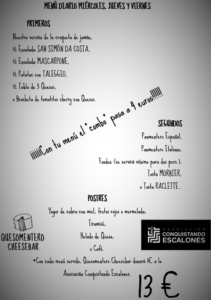 And it was born the daily solidarity menu of Quesomentero Cheesebar, which in little over a year and a half has raised € 1481 that have gone direct to researchers seeking a cure for Limb-girdle Muscular Dystrophy 1F and HIV. In addition, in all this time, ‘Quesomentero Cheesebar’ has helped the association by bringing its stands in events as well as making a point of sale and trade collaborator for the initiatives that the association has carried out. For all this, we are grateful to the Conquistando Escalones Association and we named them honorary partners.

You can find them in C / Pare Molina nº 5 of Vila-real and make your reservation and purchase online at: https://www.quesomenterocheesebar.com/