The Councilor for Education and Culture of Cehegín City Council and the President of the Conquistando Escalones Association, Maravillas Fernández and Antonio Marín, respectively, have announced today that the Drilo Gang Show will perform in Cehegín on Saturday, October 7th.
The production of Andres Meseguer, more than 70 minutes of music and fun. Meet Drilo the crocodile, learn with Huga the turtle, dance with Pom-pom the elephant and Rafga the giraffe, travel to space with Guauu the puppy and with the clown Fofó. Enjoy the best known songs of the Drilo Gang in a unique show, which is held in the municipality, in benefit of the Conquistando Escalones Association.
It will be in the House of Culture, at the 17:00 and 19:00 hours sessions. The tickets, at the price of 8 euros, will be on sale from today on the House of Culture and on the phone of the Association 606872231. Whoever buys it before 31 August, will receive as a gift the poster of the Gang of Drilo. 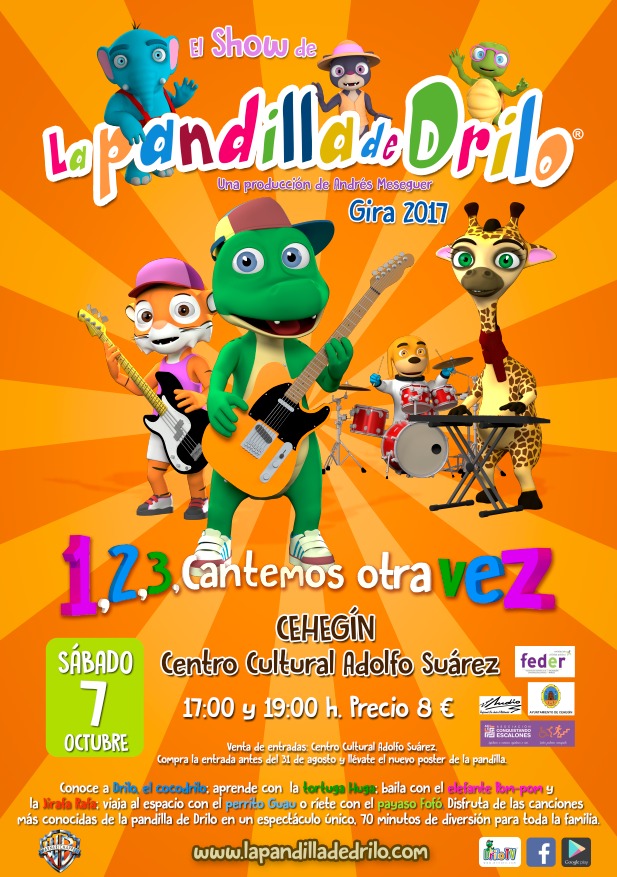 We recall that Conquistando Escalones is an association founded by those affected by Limb-girdle Muscular Dystrophy 1F and relatives of them who need to raise funds for their treatment and cure.
After the discovery of the gene that causes it, there are several investigations in progress to find the cure, finding also that the affected protein is the same that reproduces HIV. Mutation of the gene makes the affected immune system immune to AIDS and makes it the gateway to a possible cure of the global pandemic. In addition, given the rarity and complexity of this type of Muscular Dystrophy, researchers say that finding the heal would be the solution to those afflicted with many other similar diseases.