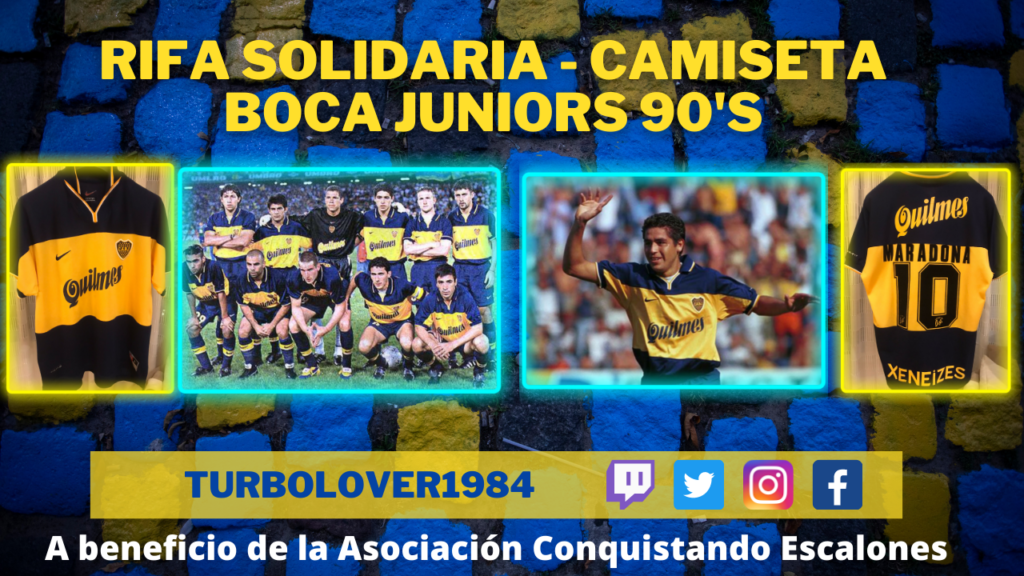 The Vila-real journalist, Víctor Franch, yesterday donated the legendary Boca Juniors shirt from the late 90s. The garment will be raffled in order to raise funds for medical research that is working hard in the search for a cure for Limb-girdle Muscular Dystrophy 1F and HIV. It will be raffled among all those who donate € 20 or more. Each € 20 donation corresponds to a raffle ticket. For example, if you donate € 40 you have 2 tickets / opportunities. If you donate € 200, you have 10. Donate is a simple click and you can pay with Paypal, Stripe or credit card. Donations obtain tax deductions for the donor in accordance with the legislation of each country.

THE LINK TO DONATE IS THIS: https://tiltify.com/@turbolover1984-2e50d0/luchando-por-la-conquista-de-escalones

When the Tiltify campaign, among all the donations received by the t-shirt raffle or any other means, reaches the goal of € 750, the raffle will be held live on the Twitch channel of Abrahán Guirao, president of Conquistando Escalones ( twitch.tv/turbolover1984)

IMPORTANT to note that you can donate from anywhere in the world and if the winner is from outside Spain, the shipment would be made. And that you don’t need to have Twitch to donate or to find out if you are a winner, we will get in touch when the time comes.

Víctor Franch (who has been covering Villarreal CF for many years, currently working in media such as Onda Cero and the newspaper Marca and who has accompanied the Yellow Submarine all over the planet on his tours and different competitions) yesterday gave the surprise live on the channel from Abrahán Guirao, president of Conquistando Escalones (twitch.tv/turbolover1984).

He has donated the Boca Juniors shirt, specifically that of the 98/99 season. It is original, bought in an official store in Buenos Aires in 1999, kept new and unused. Nike brand, with the legendary Quilmes and Xeneizes advertisements. Boca Juniors won both the Apertura Tournament and the Clausura Tournament that season and this shirt was worn by legendary players such as Riquelme, Arruabarrena, Diego Cagna or Palermo, among others. As an addition and although that season was the first that the Argentine star was no longer in the team, the name of Maradona with number 10 appears on the back, also silkscreened as a special souvenir at the same official point of sale in Buenos Aires at the end 90’s. The size is L.