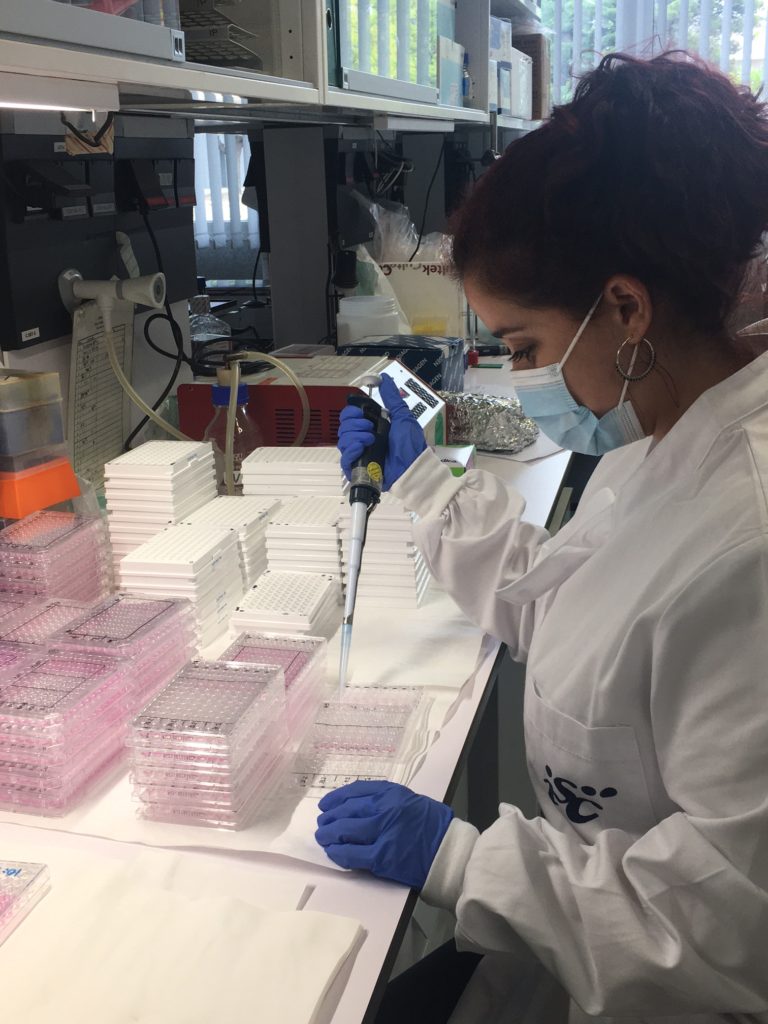 As we announced a few months ago, the Conquistando Escalones Association has expanded the collaboration that it had carried out for a few years with the Carlos III Institute of Madrid by making a donation of € 38,000 (half paid with the exit of the public square and now the other half will be paid after its incorporation), destined to collaborate in the financing of the project “Characterization of the genetic defect in the Transportin 3 gene that causes type 1F girdle muscular dystrophy (LGMD1F)”. This work is carried out in the AIDS Immunopathology Unit directed by Dr. José Alcamí at the National Center for Microbiology. After convening the square publicly in the times and in the ways established by law, we want to publicly welcome Paloma Jiménez Santana, who is the new technician who has joined and is already working in the laboratory.

Paloma is working on cultivation techniques and molecular biology and is progressively being incorporated into different objectives of the project. One of the main ones is drug screening against the mutant form of our mutation in Transportin 3, whose project manager is Javier García-Pérez. As we mentioned, it is being carried out in close collaboration with the team from the University of Valencia led by Dr. Rubén Artero, who after screening drosophila (vinegar fly) models and giving some positive and hopeful results, are already starting to check its use in patient cells. Thus, the verification by Dr Alcamí’s team of them in the mutant form of our mutation, plus other added drug libraries that will be verified, will help to subsequently make clinical tests in humans more accurate.

In the previous communication about the work of Dr Alcamí’s team (linked at the beginning of this note) we talked about other future goals, which we are happy to say are already present, given that they have also been implemented and about which we will tell more. details about it in the coming weeks. The incorporation of the aforementioned technician has been vital for this and she will also collaborate in its achievement.

As we have commented on other occasions, since the researchers of the AIDS Immunopathology Unit of the Carlos III Health Institute demonstrated the resistance of Limb-girdle Muscular Dystrophy 1F-D2 patients to HIV infection, they have been working tirelessly in discovering the mechanisms by which the mutation in the protein known as Transportin 3 generates this resistance. . During these years they have discovered how the protein acts in the cycle of HIV infection. These findings shed new light both for understanding how HIV infects patients and for explaining why muscle disease originates. With the help of genetic editing techniques, cellular and molecular models have been developed and, in parallel, a system for the rapid screening of drugs that could be potential treatments for Muscular Dystrophy has been achieved. It also works on transcriptomic analysis of the blood and on genetic expression, ways in which findings have already been made that continue to reveal the mechanisms by which this genetic mutation that causes muscle disease at the same time protects against infection by the HIV.