The solidarity theatrical representations of Arteatro have returned in a big way. After months of forced stoppage due to Covid-19, the theater company and the City Council of La Villajoyosa scheduled three performances for the benefit of the Conquistando Escalones Association and the medical investigations that seek a cure for Limb-girdle Muscular Dystrophy LGMD 1F-D2 and HIV.

We can say that it was a success since thanks to these very special works by Arteatro, € 1826 has been raised, € 21 for the medical research of Conquistando Escalones. From the Association we want to thank both attendees and sponsors who have collaborated so that this amount is the highest possible.

It should be remembered that on Saturday, June 26, the adult theater group showed different scenes of drama and comedy. Characters with longings, misunderstandings, scars and disappointments mixed with drastic methods to quit smoking, how to flirt online and not die trying or the complicated life of a messenger.
OH, I can’t believe it. An explosive combination !!

On Sunday 27, the little artists were in charge of taking the audience to the magical world of Aladdin. A performance that contains comedy, mystery, music and dance. They will make more than one move the skeleton with the choreographies of this great classic. The finishing touch to this solidarity weekend was put by the young people of the theater company with DES conectados. Scenes written and created by the young actors of Arteatro that took viewers into current topics: harassment, friendship, gender violence or love mixed with a bomb about to explode, the importance of social networks or the telephone sales.
Drama, comedy and talent in abundance !!

Thank you very much and for many more! 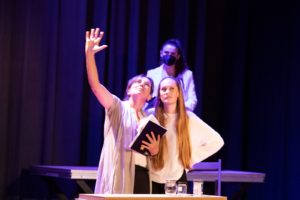 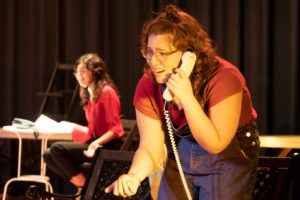