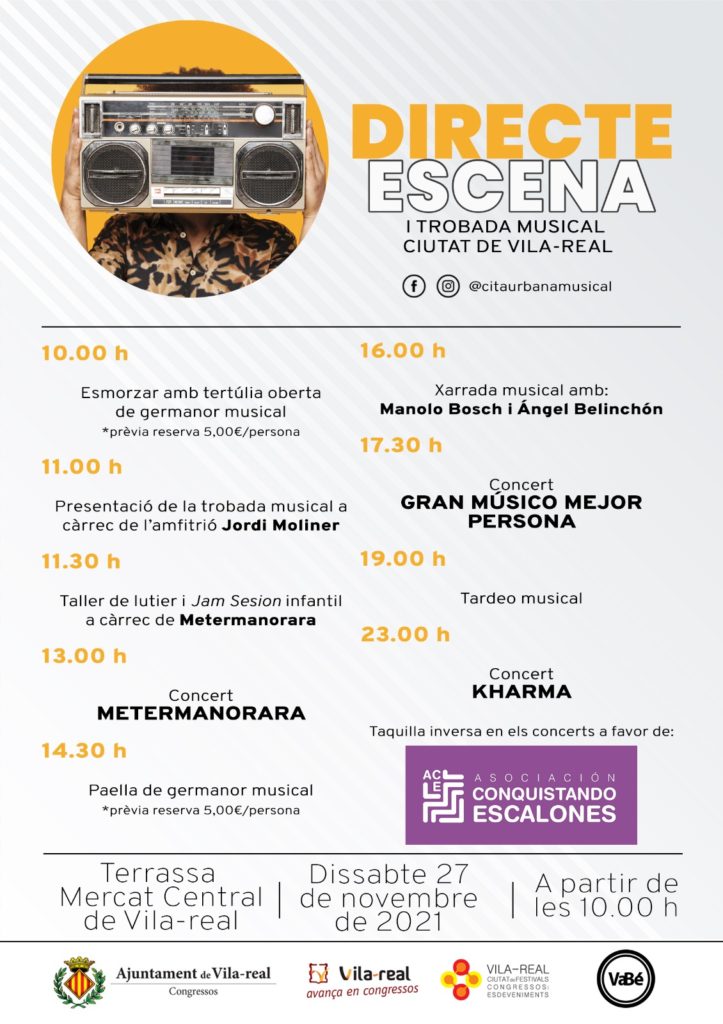 Producciones VaBé, together with the Vila-real City Council, organizes organiza Directe Escena, la primera trobada musical Ciutat de Vila-real  this Saturday, November 27, on the terrace of the Central Market. It is a free, playful and supportive event since the organization has established a reverse box office in the concerts in favor of our Association.

In addition, and also thanks to the generosity of the organizers, Conquistando Escalones will have a stop during the event with the products of the online store such as A.C.E. Beer; the new liquors A.C.E. Vermut and A.C.E. Muscatel; the last tenths of the Christmas Lottery; calendars or new additions to the natural cosmetics section such as chocolate serum, facial cream, shower gel or artisan and vegan soaps, among others.

The meeting will start at 10:00 in the morning and will last until midnight. During the morning, there will be a luthier workshop, Children’s Jam Session and at 1:00 p.m. Metermanorara concert. In the afternoon, and after a paella of brotherhood, it will be the turn at 4:00 p.m. of a musical talk with Manolo Bosch and Ángel Belinchón. At 5:30 p.m. it will be the turn of Gran Músico y Mejor Persona concert and from 7:00 p.m. the musical afternoon. This first edition of Directe Scene, the Kharma concert, will close at 23:00.