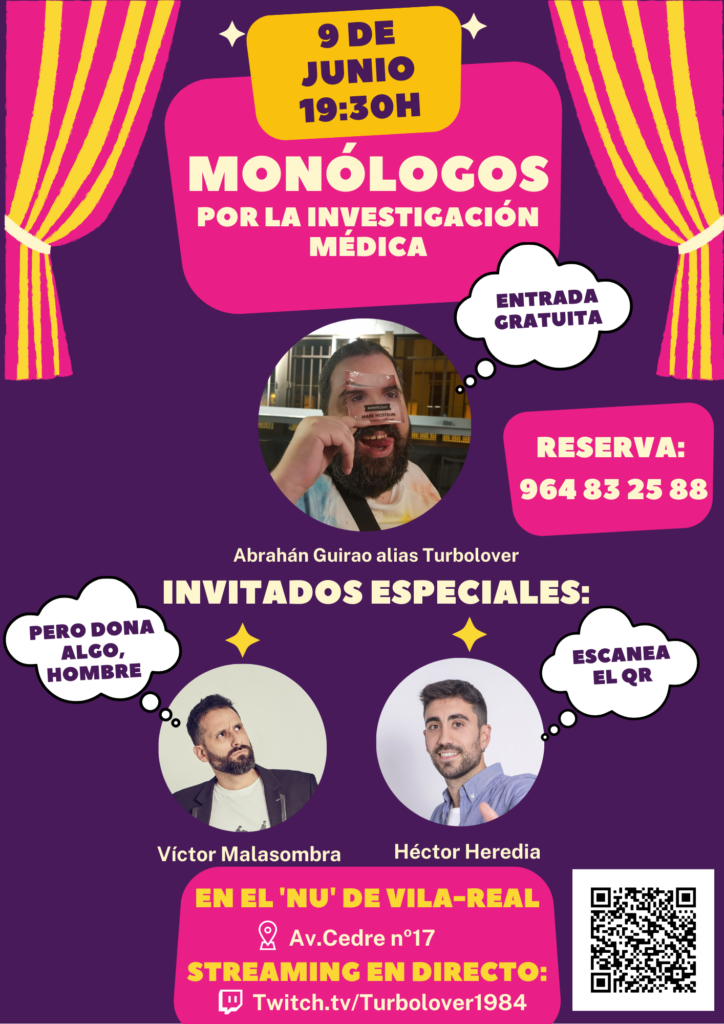 The president of the Conquistando Escalones Association, Abrahán Guirao, continues to meet challenges on his Twitch channel for the benefit of medical research on Limb-girdle Muscular Dystrophy 1F/D2 and HIV.

Although Guirao has already resorted to the humorous aspect for the presentation of different acts of the association, the president of Conquistando Escalones will go up on stage again after a long parenthesis without doing so to offer a monologue that, in the key of black humor, It will deal with disability, different groups and the power to resort to humor for “absolutely everything”. He will be accompanied by two regulars on the Castellón comedy scene: Víctor Malasombra and Héctor Heredia who, apart from their repertoire, have prepared a very special surprise for the event and for Abrahán, of which they have not wanted to reveal more details so that the attendees can enjoy it. more intensely live.

This event will take place next Thursday, June 9, at 7:30 p.m., at the NU restaurant in Vila-real (Avenida Cedre, nº17) and can also be followed live through http://www.twitch.tv/ turbolover1984. Admission is free but ballot boxes and QR codes will be enabled so that the public can donate as the event unfolds and thus collaborate with the charitable cause.

However, those who are interested in making a contribution can do so right now IN THIS LINK.

The Association Conquering Steps is made up of those affected by a rare, genetic, hereditary and degenerative disease called Limb-girdle Muscular Dystrophy 1F/D2. A few years ago it was discovered that the mutation that causes it makes them immune to HIV.

The association finances the research of a large group of scientists who are looking for a cure for their ailment and at the same time new treatments for HIV.